Centennial residents will see a question on the November ballot to add a 3.5% city lodging tax, following Centennial City Council’s approval of the question during its Sept. 6 …

Residents can submit pros and cons statements to the Centennial City Clerk, Barbara Setterlind, to be added to the ballot information booklet, otherwise known as the blue book.

The deadline to submit a statement is Sept. 23. Setterlind will review these submissions and, if some submissions are similar to one another, she will work with city staff and the city attorney to summarize and blend submissions together for publication in the book.

Those interested in contacting the city clerk’s office can email: cityclerksoffice@centennialco.gov.

Those interested in contacting members of Centennial City Council can email or call their representatives. Contact information is listed online: centennialco.gov/Government/Mayor-Council/Elected-Officials.

Residents who are unsure which of Centennial’s four districts they live in can use the city’s property search website to find out: centennialco.gov/Online-Services/Property-Search.

Community members can also attend Centennial City Council’s general meetings and voice their opinions during the public comment portion of the meeting. To find the meeting schedule, visit: centennialco.gov/Calendar-Landing-Page.

Littleton City Council is also asking its voters a lodging tax question on the November ballot, after a survey found that 64% of likely voters would support a 5% lodging tax. The tax could raise an estimated $1 million annually and would be spent on the city’s arts, culture and tourism programs.

Centennial residents will see a question on the November ballot to add a 3.5% city lodging tax, following the city council’s approval of the ballot language on Sept. 6.

Currently, the city does not have a lodging tax, but it does have a 2.5% sales tax rate on lodging services. If voters approve the proposed ballot question, the combined total will be 6%.

The lodging tax would be imposed on the price of a short-term rental, meaning less than 30 consecutive days, in any hotel, inn, bed and breakfast or Airbnb located in the city.

After a nearly two-hour discussion, the council voted 6-3 to approve the ballot question.

What would the tax revenue be used for?

With a 3.5% lodging tax, the anticipated annual revenue is $1.05 million, according to the city’s staff report.

Assistant City Manager Eric Eddy said the city cannot collect more than $1.05 million in the first year of implementation, as that was the estimate the city provided.

If more than $1.05 million is collected in 2023, that money would have to be refunded, he said. After the first year, the city can collect more if the tax generates it.

The approved ballot question states the tax revenue will be “spent on projects and services addressing visitor impacts in the areas of public safety and any other lawful municipal purpose.”

Eddy presented additional public safety-related expenditures that council could consider in the upcoming budget cycle. These include the co-responder program, new homeless liaison services and fulfilling the requirements of Senate Bill 217, which expanded body-worn cameras, records and management requirements.

“This is by no means an exhaustive list, but you are looking at over $1.11 million in annual spend on these additional public safety expenditures,” Eddy said.

Piko raised a question about the portion of the ballot that says funds will be used for projects and services “addressing visitor impacts.”

“I feel like that’s a limiting statement, all of a sudden, because I don’t know what that is for us. Is it just driving on the road?” Piko asked. “I don’t know if that needs to be there.”

“It means what you say it means,” Centennial City Attorney Robert Widner responded, explaining it depends on how the council interprets the language and applies it.

For example, he said the council could say it includes putting more police officers on the street to address the rise in visitors, or perhaps adding more street signage to provide a safe environment for people to travel.

The tax revenue does not necessarily have to be used for public safety, as the ballot language also states the funds can be used on “any other lawful municipal purpose.”

Eddy said this helps ensure “funds are available for use by council as council sees fit, in a given budget cycle.”

“I would be comfortable with taking out the ‘and any other lawful municipal purpose’ in order to ensure the money is directed at public safety,” Piko said.

Councilmember Candace Moon said she supported keeping the phrase in the ballot language.

“I don’t have a crystal ball to know where we’re gonna be 10 to 15 years from now as a city,” Moon said. “If something happens, or if we find that we need a service, then we are able to say this is a lawful municipal purpose, and we know that we have funds to do this.”

Piko formally proposed removing “any other lawful municipal purpose” from the ballot question, which the council denied in a 3-6 vote. 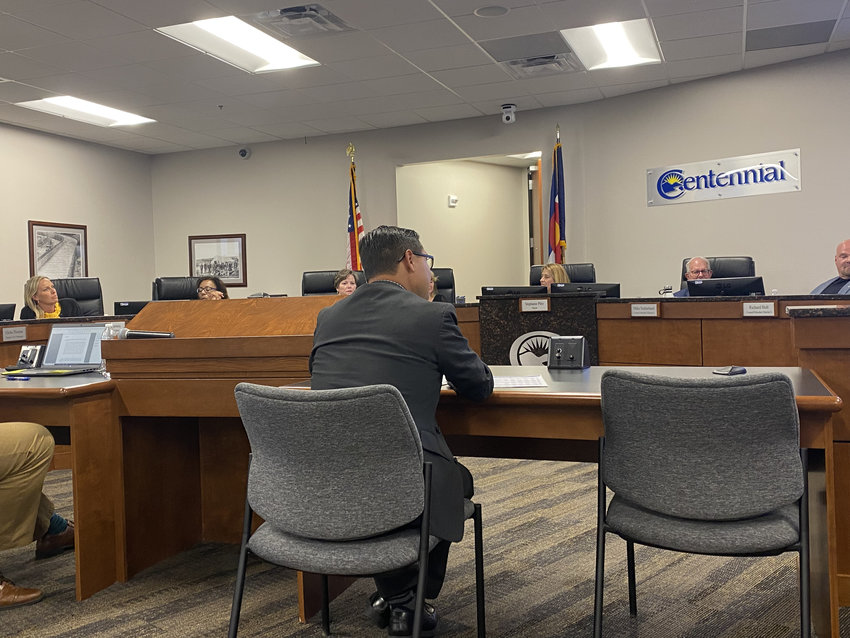 Centennial Finance Director Jeff Cadiz was among the city staff members who answered questions from city council on Sept. 6, 2022.

During deliberations, Piko asked each council member to share what tax percentage they think the ballot question should say.

Four others — Piko, Carnes, Richard Holt and Mike Sutherland — were in favor of a 3.5% rate.

Sheehan — who has voiced opposition to the proposed tax and was the sole vote against approving an intergovernmental agreement with Arapahoe County for participation in the coordinated election — responded 15%.

Carnes also questioned the timing of the tax proposal.

“I’m not sure we truly, truly need it,” Carnes said. “When we go above and beyond and take something like that, or you know just a possibility, it feels just a wee bit greedy.”

Holt said when the city council first started talking about the lodging tax, the economy was “pretty good.”

“Right now, we’ve got pretty serious inflation going on,” Holt said. “And so we are about to ask the voters of Centennial, for the first time in about 20 years, to raise taxes during this time. I understand we have increased expenditures, a lot of it mandated. And it’s needed.”

Piko said she thinks most people who would support the lodging tax support it because it’s typically visitors who pay it, not Centennial residents.

“I don’t like that terminology. I don’t like the thought that somebody else pays. We all pay, (in) some way, shape or form,” Piko said, noting visitors can impact the cost of doing business or nearby neighborhoods.

Moon said she doesn’t think there will ever be a perfect time to ask.

The lodging tax is shared, she said. If she was to go spend a weekend in Denver and stay in a hotel, she’d pay a lodging tax. It’s her choice to do so, she said.

“There are so many things that we do as a city to ensure the safety of our residents, of people who visit here,” Moon said, naming examples such as crosswalks, high-intensity activated crosswalk beacons and traffic mitigation measures.

“This is one thing that we can actually have assistance in sharing the burden of taxes, and our residents don’t have to take on the whole burden by themselves,” she said. 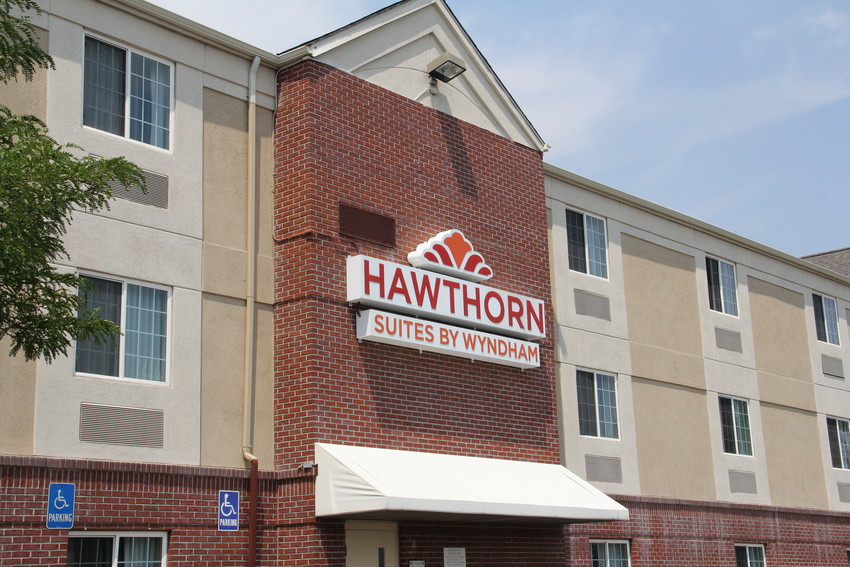 A hotel near East Arapahoe Road and South Havana Street Aug. 2, 2018, one of the many in Centennial near the Interstate 25 corridor.
Sweetland said a 5% lodging tax, which would make for a combined tax rate of 7.5% in Centennial, would still be competitive with other communities, as Denver, Aurora and Lone Tree have higher rates.

“I think we owe it to our Centennial voters to make this decision to help provide additional revenues for public safety,” Sweetland said.

Centennial staff, who previously reported Lone Tree's lodging tax rate was 6% total, verified during the meeting that Lone Tree's sales tax of just over 2.8% made the city's combined rate more than 8.8%.

Sutherland said he felt that rate was high and Centennial should not compete with the Douglas County city.

Alston, who supported the 5% lodging tax rate, said city expenses have increased over the years and are “not going away.”

“I do believe that we should be doing something proactively before we get into the bucket of where we’re pinching … pennies to just get by,” Alston said.

Maurer said she was in favor of the 5% rate because the additional revenue it would make, estimated at $1.5 million compared to $1.05 million, would help fund additional public safety matters such as improving sidewalks or traffic signals.

Given the split opinions, Alston proposed compromising at a lodging tax rate of 4%, but the proposal was denied in a 3-6 vote, with Alston, Moon and Sweetland voting yes.

Ultimately, council decided in a 6-3 vote to proceed with the 3.5% tax rate.

Piko said the recording of city council’s meeting, which is available online, is something council members can refer to citizens “to answer questions or considerations that were taken by council, or arguments that were made one way or another by council.”

Residents interested in learning more about the proposed lodging tax and/or viewing city council meetings on the issue can visit: centennialco.gov/lodging. 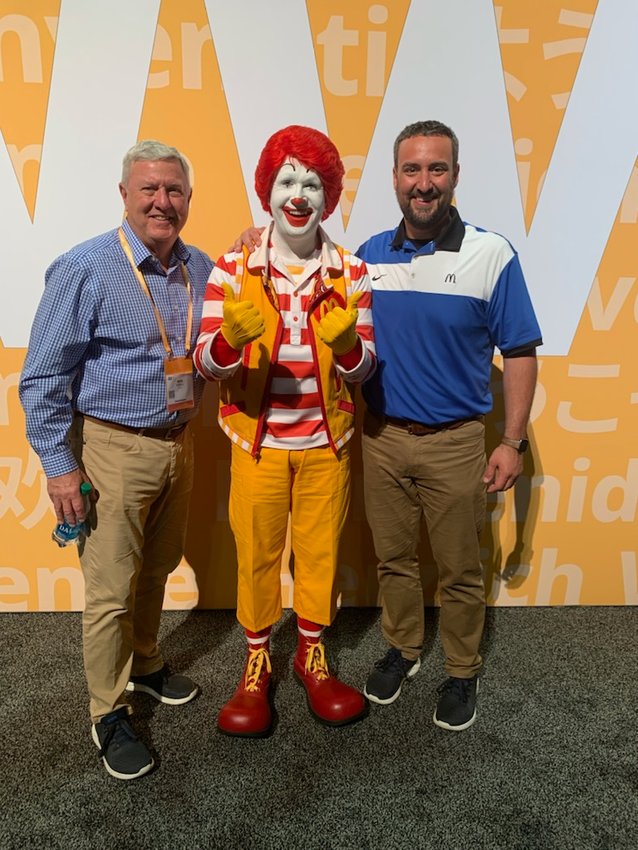